PIB Delhi – The first-ever Chess Olympiad Torch Relay entered Western India today as it reached Jaipur today morning. After passing through Ajmer, torch relay will enter Ahmedabad and then travel to Kevadia, Vadodra, Surat, Dandi, Daman, Nagpur, Pune, Mumbai and Panjim. Thereafter the torch relay will enter the Eastern part of India, North-east India aculminating culminate at South India. In the first leg of North India the torch travelled to 20 cities of Delhi, Jammu and Kashmir, Himachal, Punjab, Uttarakhand, Uttar Pradesh and Rajasthan in the last 10 days. The relay will cover a total of 75 cities, commemorating Azadi ka Amrit Mahotsav – 75 years of India’s independence. The first ever torch relay for Chess Olympiad was launched by the Prime Minister of India Narendra Modi at the IG Stadium in New Delhi on June 19. FIDE President Arkady Dvorkovich handed over the torch to the Prime Minister, who handed it over to Indian Chess legend Viswanathan Anand. Following the historic launch, the torch travelled to iconic locations including Red Fort in the national capital, the HPCA in Dharamshala, the Attari Border in Amritsar, the Taj Mahal in Agra and the Vidhan Sabha in Lucknow, among others. Governor of Jammu and Kashmir Manoj Sinha, Governor of Punjab Banwarilal Purohit, Chief Minister of Uttar Pradesh Yogi Adityanath, Union Minister of Youth Affairs and Sports Anurag Singh Thakur, Union Minister of Law and Justice Kiren Rijiju, etc remained some of the prominent dignitaries at the various Chess Olympiad torch relay events. The torch relay events start with simul chess, where Grandmasters and dignitaries play the game with local athletes. Following the events, the torch travels to the various locations via a jeep. 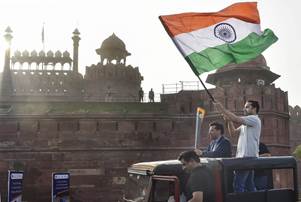 Besides, various cultural events take place including an interactive bus tour travelling from one city to another, a cultural parade varying from region to region which features young chess players’ community. For the first time in the history of the prestigious competition, India not only hosts the 44th FIDE Chess Olympiad but is also the first country that starts off a torch relay that has been instituted by FIDE for the first time in the history of the competition which started in 1927. Being the host, India is set to field 20 players – their biggest ever contingent – at the 44th FIDE Chess Olympiad. India is entitled to field 2 teams each in the Open and Women’s category. Over 2000 participants will be representing at the event from 188 countries, highest in the history of the Chess Olympiad. The 44th FIDE Chess Olympiad will be held in Chennai from July 28 to August 10, 2022.