The National Yoga Olympiad is being organised jointly by the Ministry of Education and the National Council of Educational Research and Training from 18th to 20th June 2022. This year about 600 students from 26 states/UTs and Demonstration Multipurpose Schools of Regional Institutions of Education will be participating in the forthcoming National Yoga Olympiad. Speaking on the occasion Pradhan said that yoga has served humanity in alleviating sufferings and building resilience, especially during the post-Covid era. The Minister highlighted that to encourage healthier choices and bring people even more closer together, Prime Minister Narendra Modi has suitably chosen this year’s theme as Yoga For Humanity. He further said that Yoga is India’s gift to the world and it has gained tremendous popularity globally since the UN General Assembly adopted Prime Minister Narendra Modi’s proposal to celebrate 21st June as International Day of Yoga. Yoga is uniting the world in the pursuit of good health and wellness, he added. 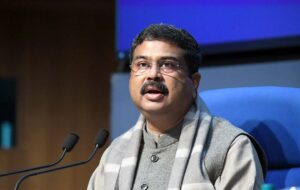 The Minister stressted that NEP 2020 lays special emphasis on the physical and emotional well-being of both students and teachers. Sports-integrated learning will inculcate sportsman spirit and help students adopt fitness as a lifelong attitude, he added. Pradhan said Yoga is an integral part of health, wellness and physical education.  He suggested NCERT to include the ancient wisdom of Yoga in our curriculum. While we are in the process of developing the NCF, we must prioritise yoga right from ECCE to Class 12th level. He also suggested NCERT to conduct yoga olympiads at the school, block, district and state levels.  He said Involving school students from every block will further the legacy of yoga and also help in making yoga as a lifestyle. The  Minister congratulated all the selected students who are representing their states/UTs in the National Yoga Olympiad.  He appreciated them for their participation right from the block level.

While addressing the participants Sarkar said that yoga has to be popularised as a part of the National Education Policy 2020. He added that the is aim to promote such an education system which gives the citizen a vision to see the country in a unified form. He also stated that in the Yoga Olympiad,  asana, pranayama, kriya, meditation etc will be demonstrated by the students, so that they will be able to understand the importance of yoga experientially. He also re-emphasised on the values of Yoga which is now globally accepted and how it would be able to accelerate the sustainable lifestyle worldwide. The theme for this year is “Yoga for Humanity”. It is an acknowledged fact that yogic asanas are beneficial to all in maintaining quality health and holistic personality. The NCERT started the National Yoga Olympiad in 2016.

Even during the Covid-19 pandemic, when the whole world came to a standstill, the spirit of yoga was kept alive by organizing a Quiz competition. In that event, students of KVs, NVs and students from Demonstration Multipurpose Schools of Regional Institutions of Education participated in a large number. This year too, along with the national yoga Olympiad, quiz competitions on yoga will be organised.He also re-emphasised on the values of Yoga which is now globally accepted and how it would be able to accelerate the sustainable lifestyle worldwide. Vice Chairman, AICTE, M.P Poonia; Director NCERT, Prof. Dinesh Prasad Saklani; Joint Director, NCERT,  Prof. Dhar Srivastava; Secretary, NCERT – Prof. Pratyush Kumar Mandal, and senior officials of Ministry of Education and students from various parts of India attended the event.