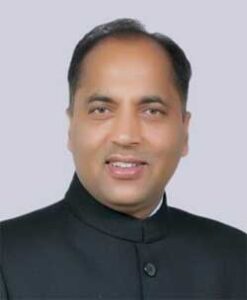 Chief Minister Jai Ram Thakur acclaimed the collaborated efforts of the people of the state as Shimla city has been placed on top in the country in Urban Development Goals Index 2021-22 released by NITI Aayog recently. Congratulating the people of the state on this occasion, Jai Ram Thakur said that NITI Aayog, Government of India has included 56 cities which include 44 cities having population of more than 10 lakh and capitals of 12 states with population of less than 10 lakhs. He said that this list has been prepared keeping in view the performance of cities under categories such as poverty, health, education, gender equality, affordable and clean energy and climate action.

He said that 46 targets and 77 indicators were fixed for the evaluation of this ranking and Shimla city has got the best position with 75.50 marks out of 100. Jai Ram Thakur said that although most of the population of the country resides in villages, but cities also play an important role in the development of the country.  Therefore, NITI Aayog under the Indo-German Development Corporation, in collaboration with GIZ and BMZ have developed a dashboard for the latest information regarding the Sustainable Development Goals Urban Index.