PIB Delhi – Rajeev Chandrasekhar, Union Minister of State for Electronics & IT, Skill Development & Entrepreneurship will attend the International Yoga Day Celebrations at Pattadakal in Bagalkot district of Karnataka State, tomorrow. Prior to taking a flight for Hubli from the Hindol airport Noida, the Minister took to his social media and tweeted “Tomorrow PM @narendramodi ji will lead IDY 2022 celebrations from Mysuru, Karnataka . His vision has made yoga truly global. This year we also showcase our 75 Iconic IDY Locations to the world. On this Yoga Day – I will be at majestic Pattadakal Temple complex, Karnataka” On arrival at Hubli airport, the Minster was warmly received by the officials of the state and central governments and Party Karyakartas led by District President . Sanjay Kapatkar. From Hubli, the Minister traveled to Bagalkot district to take part in Yoga Day Celebrations scheduled for 21st June. 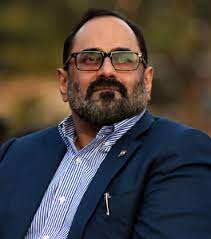 The Minister would be leading the mass celebrations at Pattadakal where more than 3000 participants are expected to gather at the UNESCO World Heritage Site. The temple complex is the legacy of the Early Chalukyas (543-753 CE), who built a series of nine Hindu temples Hon’ble Prime Minister Narendra Modi ji has taken the International Day of Yoga (IDY) to newer heights. The IDY- 2022 is being observed throughout the country and the whole world on an unprecedented scale. From Fiji in the east to SanFrancisco in the west, from top leadership to grassroots, people of all castes, creed, nationalities and races have joined the IDY celebrations today on June 21st, aligning themselves with benefits of Yoga. The journey of organizing the International Day of Yoga every year started in 2015 with the tireless efforts of Hon’ble Prime Minister Narendra Modi. On December 11, 2014, the 193- member UN General Assembly approved the proposal with a record consensus of 177 co-sponsoring countries, a resolution to establish 21 June as the “International Day of Yoga”.

India’s cherished cultural heritage, Yoga, gained universal affirmation as it was inscribed on the UNESCO’s representative list of the intangible cultural heritage of humanity on 1st December 2016. This year, marking the 75th year of Independence, 8th year of Modi Govt and 8th International Day of Yoga, PM shall lead the Celebrations from Mysuru in Karnataka while the Union MoS Rajeev Chandrasekhar shall attend a mass Yoga celebration organized at Pattadakal in Bagalkot District of Karnataka. The celebrations are being done at 75 iconic locations all over India Incidentally, the Minister has a unique connect with the Bagalkot District. In October 2009, Karnataka witnessed one of the worst floods in several decades that battered the state for nearly one week and caused heavy damage to lives and properties in several districts of Northern and Coastal parts of Karnataka. With hundreds of people losing their lives and lakhs rendered homeless by these floods. Bagalkot district was among the worst affected.