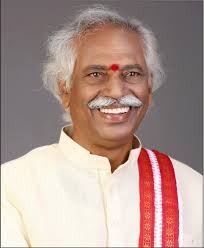 To mark the celebration of World NGO Day, Governor Bandaru Dattatreya invited organizations working in various fields to Raj Bhawan to discuss the ground realities in our society. The objective of meeting was to gain firsthand information from the NGOs that are devoting time with a hope to make a difference in the society and form a new plan of action to deal with various issues like education, women and children health, drug abuse, senior citizens and environment.

While presiding over the meeting the Governor said that social change in social works could be possible through NGOs. He appreciated their work towards a social cause as it was rendered through the heart. He said that the objective of the meeting was to get acquainted with difficulties and seek feedback from the NGOs, so that the service sector work could be further enhanced.

Dattatraya said that small work could help a lot and these works require more dedication than money, which can contribute greatly to society. He expressed concern over the increasing prevalence of drugs and said that it not only kills humans but has an adverse effect on society as well. For this, the environment needs to be changed and such elements must be dealt with strictly, who were involved in its illegal business. He stressed the need to establish more rehabilitation centres in the state. He appealed for cooperation in the campaign against drugs. He said that today it has emerged as the biggest problem in the state. He also urged all NGOs to help in reaching the benefit of government schemes to the eligible person.

On this occasion, the representatives of various NGOs also gave their suggestions to make schemes and plans more effective at the ground level. Few of the participating NGOs were Umang Foundation, WWF, HelpAgeIndia, Keekli Charitable Trust, Bitiya Foundation, and Representative of Red Cross Socities among others. All representatives were hopeful that such exchange of dialogue can open new avenues for the social workers and can boost their moral.