ere nearing completion. This was stated by Chief Minister Jai Ram Thakur while presiding over the 11th meeting of Himachal Pradesh Tourism Development Board here today.

Chief Minister said that the State of Himachal Pradesh was blessed with immense tourism potential and focus of the Government was to provide best tourism infrastructure to the tourists visiting the State. He said that Culture Centre at Janjehalli in Mandi District was almost completed by spending an amount of Rs. 25.17 crore which would be an added attraction to the tourists visiting the virgin Janjehalli valley. He said that the Centre would have an open air theatre, three new cottages, conventional hall, cafeteria and 12 modern rooms.

Jai Ram Thakur said that Kangra Haat was being constructed at Kangra by involving an amount of Rs. 17 crore. He said that beautification of Dal lake and Art and Craft project at Bhalai Mata temple at Chamba would not only help in showcasing the rich cultural tradition of the State, but would also be a major attraction for the tourists. He said that this project would be completed by September this year by spending an amount of Rs. 4 crore. Similarly, beautification of Dal lake would also be completed by September with a cost of Rs. 4 crore, he added.

Chief Minister said that Convention Centre at Kyarighat was coming up at a cost of Rs. 29.90 crore and would be completed by September this year. He said that in addition to this Art and Craft village was being developed on 44 bigha land near Kandaghat village for which FCA approval was underway. He said that this would prove an attractive destination for the tourists visiting the State as both these projects were on the major national highway between Kalka-Shimla.

Jai Ram Thakur directed the officers to ensure that Shiv Dham Phase-1 in Mandi district must be completed in stipulated time period. He said that the approach road from Mandi to Shiv Dham should be widened keeping in view the future demand to cater the heavy flow of traffic. He said that efforts must also be made for effective fusion of landscape and avoid over construction of concrete structures.

Jai Ram Thakur directed the officers for expediting the work on all the major ropeways viz Dharamshala-Mcleodgang, Palchan-Rohtang, Aadi Himani-Chamunda, Sri Anandpur Sahib-Sri Nainadevi etc. He said that this would not only provide alternative mode of transportation to the tourists visiting the State, but also give big boost to tourism development in these areas. He also directed the officers to effectively pursue FCA cases so that work on various tourism project could be taken in hand soon.

Chief Minister said that the Government was also taking up an ambitious project under PPP mode for developing Chanshal in Shimla district as a new tourist destination, especially for adventure sports lovers. He said that various components under this project include setting up of ropeway, ski-lift, ski-resort, helipad, camping and ski-slopes. He said that EoI have been issued on 1st March and last date for receiving the same has been fixed for 19th of this month. He said that this project would give new boost to tourism development in Shimla district.

Jai Ram Thakur said that work must also be expedited on North and South portal alongside Atal Tunnel Rohtang, as the tunnel has emerged as the major tourist attraction. He said that on its completion, the tourists would get better way-side amenities as well as boarding lodging facilities, while visiting the Atal tunnel. He also directed the officers to explore possibilities of setting up a memorial in memory of former Prime Minister Atal Bihari Vajpayee at Prini village.

Chief Minister also directed the officers to ensure time bound completion of all the major heliports coming up in the State so as to facilitate the tourists visiting the State. Secretary (Tourism) Devesh Kumar assured the Chief Minister that all the projects under execution would be completed at the earliest. Director (Tourism) Yunus welcomed the Chief Minister and conducted the proceedings of the meeting. 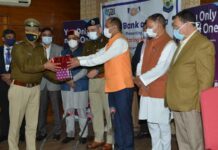 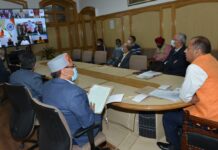