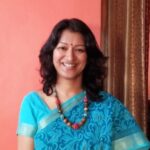 Yeh Zindagi — Life gives us various experiences. Sometimes it seems positive and sometimes it feels like a burden. But despite these things, there is something which helps us in moving ahead… like a drop of nectar that absorbs all the negativity.

Neelam Bhatt, born in Delhi, but originally from Uttarakhand has spent her formative years in her hometown, she then came back to Delhi and has been living here since.

She has been associated with the Publishing Industry as a writer, editor and translator for more than twenty years. Encyclopaedia Britannica, Scholastic, Oxford University Press, Penguin, Katha, Pearson, TERI, Popular Prakashan, Manjul Prakashan and Campfire Graphic Novels among others, she has been a part of. She has also developed content for Mythological titles for Campfire Graphic Novels.

Devdutt Pattanaik’s Business Sutra and The Diary of A Young Girl: Anne Frank, Half Lion: How P.V. Narsimha Rao Transformed India, Jugalbandi: The BJP before Modi, Incarnations: India in 50 Lives, The Definitive Book of Body Language, Why Men Don’t Listen and Women Can’t Read Maps by Barbara and Allan Pease are some of the titles she has translated from English to Hindi.

Recipient of the ‘Navodit Lekhak Puraskar Pratiyogita’ Award from Hindi Academy of Delhi for her poems for two years in a row, Neelam is passionate about writing poems.

Neelam has also been associated with the News Division of All India Radio as a Newsreader and Editor and as an RJ with FM Gold Channel. She has presented quite a few educational programmes on television and has written few scripts as well. She has also done many story telling sessions with children.

She is currently working independently.