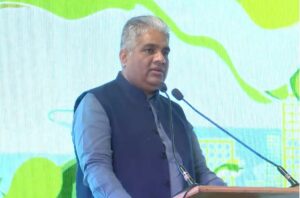 PIB Delhi – Union Minister for Environment, Forests and Climate Change (EF & CC) Bhupender Singh Yadav today  called for a concerted action by all to contain the growing menace of air pollution in Indian cities.  Inaugurating a two day sensitization-cum-review workshop on National Clean Air Programme (NCAP) for the Western Region states of Maharashtra, Goa, Gujarat and Madhya Pradesh in Mumbai, Yadav asked all officials and stakeholders to work with a missionary zeal and understand that fighting air pollution is not just a job, but a service to humanity.  He emphasized that public participation is key to achieving cleaner air for all with sensitisation of mayors, NGOs, students, and the public.

Speaking on the occasion, the Union Minister said, “Environment, Forests and Climate Change Ministry is meant to create solutions so that all in society can live well”. He  enlightened the participants about how India has led through vision and action in the area of environment and climate change as noted during the COP-26 in Glasgow, UK held from October-November 2021.  “India has set an example by not only implementing its vision and actions, but also by becoming a voice for the developing countries in matters of environment”, he said. Stating this, he noted that India needs to focus on green and renewable energy. “We have committed to achieve 500 gigawatt (GW) renewable energy capacity by 2030, and cut emissions to net zero by 2070”, he added. Recounting India’s international collaborations Yadav said “we have developed Disaster Resilience Infrastructure along with UK.  Further more, India, UK and Australia have formed an organization called IRIS (Infrastructure for Resilient Island States) in collaboration with small island countries like Fiji, Jamaica, Mauritius etc., and have decided to donate 10 million dollars together”.  About technology transfer, India will share timely information about cyclones, coral-reef monitoring, coast-line monitoring, etc. with these island countries with the help of ISRO’s satellites. He also reiterated that a new leadership group, led by India and Sweden, has been announced at the United Nations Climate Action Summit to help guide the world’s heaviest greenhouse gas emitting industries towards low-carbon economy.

India with France, has initiated the International Solar Alliance (ISA) since 2015, which has an alliance of 102 countries. US is the newest member of the alliance, he further stated. The National Clean Air Programme has been launched by the Centre as a as a long-term, time-bound, national level strategy to tackle the air pollution problem across the country in a comprehensive manner.  It aims to achieve 20% to 30% reduction in Particulate Matter concentrations by 2024 keeping 2017 as the base year.  Under NCAP, 132 non-attainment cities (NA Cities) have been identified across the country based on the Air Quality data from 2014-2018.  The NA cities list is a heterogeneous mix of cities of all sizes and types.  Most major cities of Mumbai Metropolitan Region, Pune, Nagpur, Nashik, Aurangabad, Kolhapur etc figure in the NA cities list for poor air quality.

The city specific action plans have been prepared which, inter-alia, include measures for strengthening the monitoring network, reducing vehicular/industrial emissions, increasing public awareness etc. The Ministry of Environment, Forest and Climate Change has been organizing Workshops across the country to sensitize and exchange ideas and best practices on fighting air pollution. Participating in the inaugural session, Minister for Environment and Climate Change of Maharashtra Aaditya Thackeray informed that BEST is planning to convert half its fleet into electric buses by 2023 and the entire fleet by 2027, as a part of Mumbai’s initiatives for clean air.  Representatives of Maharashtra, Gujarat and Goa made presentations about the action plans being implemented in their respective states.