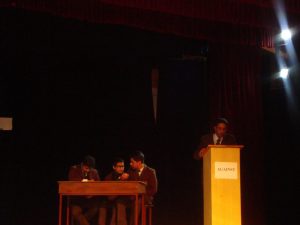 An Inter House English Debates was held at Auckland House School for Boys which was Judged by Pallavi Mehta, Rajni Harrison and Nayab Masud, Faculty Members, Auckland House School, Shimla. The boys from the four Houses participated enthusiastically in the same. The first topic for the debate was – “Politics should be kept out of School” which was between French and Lefroy House and the motion was lost.

The second topic for the debate was – “Homework should be banned” which was between Matthew and Durrant House and again the motion was lost.

The judges thoroughly enjoyed the event and praised the students for the efforts put in by them.